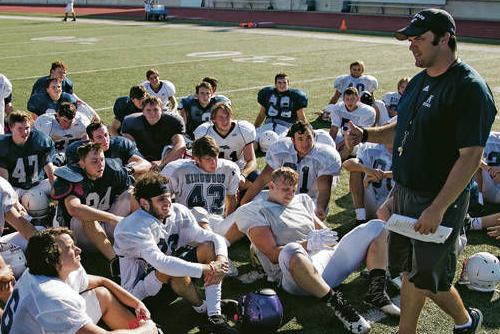 Humble, Texas — Blake Herrera fidgeted with the crisp, white jersey borrowed from another school before wiping an arm soaked in sweat on football pants that didn’t belong to him.

The senior didn’t care that the No. 22 across his chest wasn’t his and everything he wore was a hodgepodge of items donated from schools wanting to help.

What was important to the bright-eyed 17-year-old was this: His Kingwood High team was back together after flooding from Hurricane Harvey all but destroyed his school and everything in it. And in about 24 hours, he and his teammates would be back under the Friday night lights for a scrimmage that will be among the first of its kind since the storm shut down prep football in the largest city in Texas — a welcome and comforting step forward after scores of games were canceled or postponed in the state that reveres the sport more than any other.

“There was a time when us and our coaching staff thought that we might not play football again,” Herrera said. “But then when we got the help from [other] schools … it really meant a lot to us and really touched our hearts. Because … it was our life basically and it was sad that it got taken away from us.”

While Herrera and the rest of the Kingwood football team returned to practice this week, things are far from normal in an area where thousands of homes were swamped, many beyond repair. The team is practicing nine miles away from the school and Kingwood students will attend classes at still another school beginning on Monday.

“I equated the inside of Kingwood High school to what you see on the Titanic,” said Troy Kite, the athletic director for the Humble school district. “You just can’t describe the ruins that were in there. It’s just impossible. It’s like a movie, and yet that movie is now us.”

Kingwood is one of the schools hardest hit, but thousands of young athletes are trying to figure out their next move — not just where they might play but whether they will play at all. The University Interscholastic League, which oversees public school athletics in Texas, created a “Hurricane Harvey waiver” to allow students displaced by the storm to transfer and immediately be eligible for sports.

“This is really the largest disaster we’ve had to deal with in the state at the UIL level,” deputy director Jamey Harrison said. “We have dealt with other storms from Katrina where as a storm we were taking on a number of people that were displaced from Louisiana and other states, and then Hurricanes Rita and Ike that impacted less schools and impacted them in a very different way than this one did.”

State officials recommended that the more than 2,700 students at Kingwood High simply transfer elsewhere while the school is repaired, Kite said. That would have not only have broken up an entire school, it would have meant none of its teams could play this season.

It was a plan district administrators quickly rejected.

Instead, they came up with an unusual plan that has Kingwood’s students attending classes at Summer Creek High. The Summer Creek students will go to school from 7 a.m. to 11 a.m. each day and the Kingwood students will go from about 12:30 p.m. to 4:30 p.m. It also means that football is back, too, and just in time for teens eager for its familiar routines among the chaos.

Herrera didn’t just lose his school in the flooding. His home is gone, too. He’s bunking with a friend while the rest of his family, including his mother who was rescued on a boat by one of his teammates, is living with relatives outside of town.

“I like staying at my friend’s house, but it gets old after a while,” he said. “I miss my mom. I miss my stepdad. I miss my puppy. I miss a lot.”

The uniforms he and others were wearing at practice this week didn’t match, and many of their helmets bore the name or logo of other schools. Kite was among those who fished equipment out of the fetid waters that engulfed the Kingwood locker room. He hadn’t had much reason to smile as he worked tirelessly to salvage Kingwood’s season.

“As you’re pulling all those wet uniforms out, I can’t begin to describe how nasty it is,” he said. “And you go: ‘Dear God, what are we doing?’ And … you want to quit and then you’ll see another coach from another school showing up and going in to help us and you get a second wind and you keep going.”

When Kingwood had its first practice since the storm, he gazed out onto the field, taking in the rainbow of colorful jerseys and all the struggles dissipated for a moment.

“We looked like a bag of Skittles,” he said chuckling.

New uniforms were expected to arrive on Friday, but there are no plans to use them during the evening scrimmage that will be held exactly two weeks after Harvey made landfall in Texas. Everyone liked the mixture of colors from all the schools, a tangible representation of how the community came together to help.

“We are going to scrimmage just like this in our borrowed equipment and let our community see what we’ve been talking about,” coach Barry Campbell said.

While Kingwood needed many helping hands to keep its season going, the players who got through the storm safely didn’t hesitate to pitch in to help their neighbors.

Kingwood linebacker Aaron Finch said he and his father borrowed a boat and spent time after the storm rescuing people from flooded homes. He estimates that they picked up 50-60 people.

“It was heartbreaking,” he said. “Me and my dad saved a 5-day-old baby and a mom that had a C-section and it was really sad for them to get in the boat.”

Wanting to see how their school looked, Finch, Herrera and another teammate were on a jet ski when they saw a deer struggling to swim in water up to its neck.

“It wouldn’t have lived if we wouldn’t have helped it,” Finch said, fighting back tears. “He was so tired and so exhausted that he didn’t care what happened … so we did what we could and helped him to safety.”

For now, the thought of being on the field in front of their families, friends and fans was a welcome distraction.

“Friday night lights is an exciting thing in Texas … [and] I think our football team can be a rallying point in the recovery process,” Campbell said. “People have been working for over a week, working their nails to the bone, their fingers to the bone. They’re sore and they still have a lot of work to do. I think our team can allow a little outlet, a little normalcy, a little release, a little fun.”

It’s already given Herrera a small slice of what his life was like before the storm.

“When you come out here it kind of eases my mind,” he said. “It feels really good out here.”